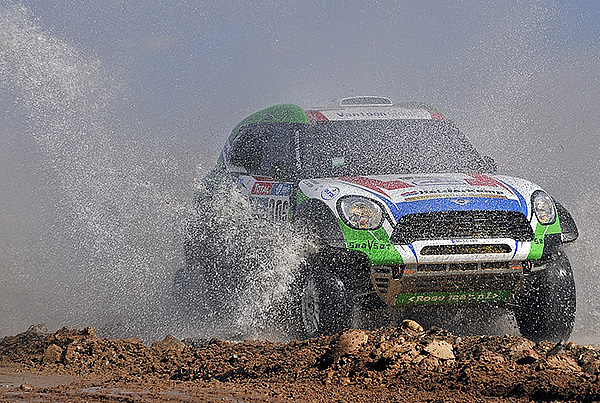 MINIS BACK IN DAKAR CONTENTION: Erik van Loon and Wouter Rosegaar blast through the rocks and water of the 2016 Dakar Rally in their Mini All4 race car. Their and four other Minis finished in the top 10 of Stage 8, the first after Sunday’s rest day. Image: DPPI

BELEN, Argentina – Suddenly the Mini All4 Axion X-Road Racing team has shot into the 2016 Dakar limelight with a brilliant performance on the 766km Stage 8 that put two if its cars in the top five and five in the top 10 after Sunday’s ‘rest’ day.

Nasser al-Attiyah (QAT) and co-driver Mathieu Baumel (FRA) swept over the sand and rocks of Monday’s Stage 8 to win the section by 12 seconds to take third place overall land cut the time difference between them and race leader Stephane Peterhansel (Peugeot 3008) to 14min43.

“It is a good feeling to win the first stage after the rest day,” al-Attiyah told The Corner is a media release. “We put a lot of pressure on our competitors and our target now is to put even more pressure on them in the next two to three days and win Dakar. That is why we are here.

“From the start today we took the advantage and pushed a lot. The last part wasn’t easy but we took the win. We’ll open tomorrow (Tuesday) as first on the road so we will push and push again.”

WATCH the day’s action on video

The first desert stage of the 2016 Rally Dakar produced a great day’s racing. Not just because of the driving skill required in the sandy terrain but also the need for accurate navigation – there are no road signs in the dunes.

Another Mini driver, Mikko Hirvonen (FIN), experienced a Dakar desert stage for the first time but, with experienced Michel Périn (FRA) by his side, finished the day fifth.

The South African Toyota Gazoo team claimed “mixed results” for the day though all three Hilux race vehicles made it to 383km between Salta and the Argentine city of Belén though Leeroy Poulter/Rob Howie moved up to fifth overall with the eighth-fastest time on Stage 8, despite getting stuck in the dust of slower drivers.

They were promoted by two positions today after Peugeot’s Sebastien Loeb crashed near the end of the stage yet still managed to limp to the finish, though his car was badly damaged and he lost 1hr05min16 to drop to eighth overall.

Poulter/Howie’s team mate and previous winner of the Dakar, Giniel de Villiers and navigator Dirk von Zitzewitz, got stuck on a clump of camel grass after an earlier puncture. They were pushing hard and posting very competitive sector times until they tried to drive into a dry riverbed. The bank proved too steep so they reversed a short was and finished with all four wheels off the ground, stuck on the tussock of camel grass.

“It was such a simple mistake, but these things happen,” said a rueful De Villiers from the bivouac at Belén. “We lost the best part of 20 minutes extricating the Hilux.” They are now seventh in the overall standings, 54min49 behind race leader Peterhansel but only 30secs behind team mates Yazeed al-Rajhi/Timo Gottschalk (#305) who are sixth overall.

Stage 8 also saw the Axion team’s Spanish pairing of Joan ‘Nani’ Roma / Alex Haro come into play in grand style. They placed their Mini All4 sixth on the day, the third Mini in the overall top 10. Roma said later:

“It wasn’t too bad this morning but then the central diff locked. I tried to unlock it, but it wasn’t possible so I said ‘OK, we go like that’. In the straight lines it was OK but on the twisties it was difficult to go fast all the time.

“Near the finish I had a slow puncture but we got there. Alex did a very good job with navigation.”

‘TUESDAY – WE’LL BE IN A GOOD POSITION’

“A nice stage,” Terranova said. “We started more or less 17th and it was difficult to overtake in the first section. We caught several competitors and then we lost several minutes. Tuesday we will start in a good position…”

So, al-Attiyah has finally brought an end to the Peugeot domination of the 38th Dakar. At the end of a completely crazy stage the leading Mini triumphed over the Peugeots of Carlos Sainz, 12 seconds behind, and Stéphane Peterhansel, 31 seconds behind. As for Sébastien Loeb, having difficulty in the dunes, he made a wrong move towards the end of the special and dropped down the general standings.

In the bike race, Toby Price (KTM) won the stage and took over the overall lead.

As the Dakar reporter said: “What a race! What a day! Stage 8 will most certainly be remembered as one of the most hotly contested on this Dakar. al-
Attiyah pulled out all the stops to put an end to the domination of the Peugeots, claiming victory right at the end of 393km effort. In the lead on the
stage from the first CP, the Qatari at one point was 1min30 ahead of Sainz and more than six minutes ahead of Peterhansel.

“Too good to be true? Almost!”

DESPRES HOLDS ON TO FOURTH

The Peugeots tried hard with a comback towards the end but finished 12 and 31sec respectively behind al-Attiyah’s Mini. Sesbastien Loeb, who was leading overall, got stuck in the dunes at the start of the second section; released, he flew after the leaders but to a wrong turning 20km f rom the stage end, lost control, and after a series of spectacular roll – in which he and co-driver Elena were unhurt – was the major loser of the day.

All of this, the Dakar report said, would not be reassuring for new rally leader Stéphane Peterhansel, 2min09 ahead of team mate Carlos Sainz and 14min43 ahead of al-Attiyah (Mini).

Toby Price (KTM) started the stage 3min12 behind the leader of the general standings, Honda’s Paulo Gonçalves but at the end of the stage in Belen he was 5min17 ahead and leading overall by 2min05. Gonçalves, without his navigation instruments after a crash, managed to limit the damage to second overall while Stefan Svitko held on to third.

The Patronelli brothers enjoyed another problem-free day – Marcos was victorious ahead of Alejandro – while South African Brian Baragwanath was third. In the general standings, the Patronelli brothers remain in command – by 2min06, followed by Peruvian Alexis Hernandez who is more than 30 minutes behind.

The truck special was again won by Hollander Gérard De Rooy (Iveco) in front of a Russian duo made up of Nikolaev and Karginov, each in a Kamaz. De Rooy is now in the lead overall ahead of Eduard Nikolaev by 7min58 with Pieter Versluis third, 13min29 behind.

The 2016 Dakar has 13 stages, with the final one taking on Saturday January 16 in the Argentine city of Rosario.