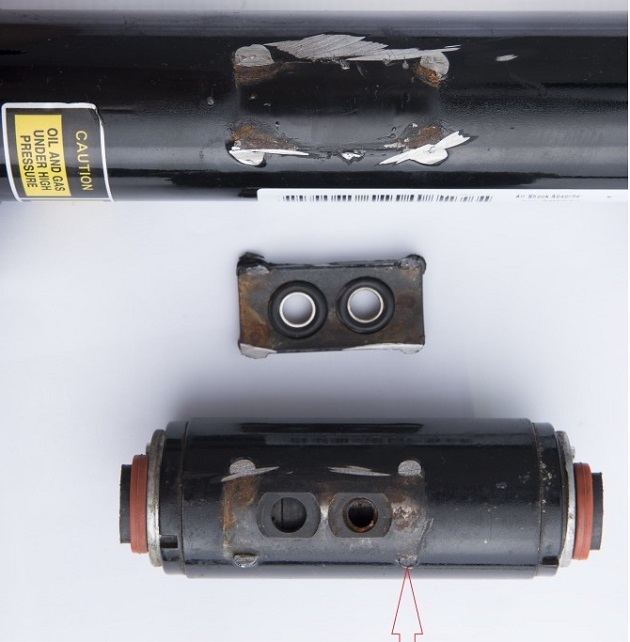 DON’T BE FOOLED INTO RISKING YOUR FAMILY’S LIVES: This is the kind of shoddy work you can expect on the fake Bilstein shock-absorbers. Below is a list of other defects to watch for. Image: Bilstein/Motorpress

JOHANNESBURG – Bilstein South Africa, which imports and distributes Bilstein gas-pressure shock-absorbers, has warned vehicle owners to look out for counterfeit versions of the brand’s Airmatic spring/dampers.

“Using them,” the company warns, “will severely compromise a vehicle’s stability and safety.”

Damper (shock-absorber) assemblies with integrated height-adjustable air springs are fitted to a number of upmarket SUV’s and sedan cars and provide extra ground clearance off-road and a secure lower ride-height on tar.

They are, the company told The Corner in a media release, complex and sophisticated and combine electronically controlled hydraulic wheel damping with air-springing and can react instantly to road conditions, steering and speed.

“They can, however, be counterfeited or inadequately refurbished and sold at prices way below the real thing,” Bilstein SA warns, “often with the inference that their performance will be the same or similar to that of the original.”

So, look out for the forgeries by checking several key visual differences:

For starters, a fake “Airmatic” can be 40mm too long. Dimensional accuracy is critical and if the suspension is forced to work through an abnormal arc it will not only cause incorrect geometry but also the premature failure of rubber bushings and mountings and accelerated wear of other components such as constant-velocity joints.

It’s also been found that while a valve cylinder controlling oil transfer to the main damping tube was genuine it had been harvested from a discarded assembly and attached to the fake in a completely non-functional manner: there was no link between the two so while the fake still controlled the ride height the technology to control damping rate didn’t work.

A check on another assembly found the wrong air-bellows attached by inadequately crimped retaining rings which could, during a sudden harsh suspension movement, suspension collapse with potentially catastrophic consequences.

So, Bilstein has given The Corner a series of images which will help to identify fakes. Here are some of the key differences:

Finally, if the price of what appears to be a Bilstein shock-absorber seems to be very low against that of other retailers, it’s probably a fake and you could be risking your and your familiy’s lives by being suckered.