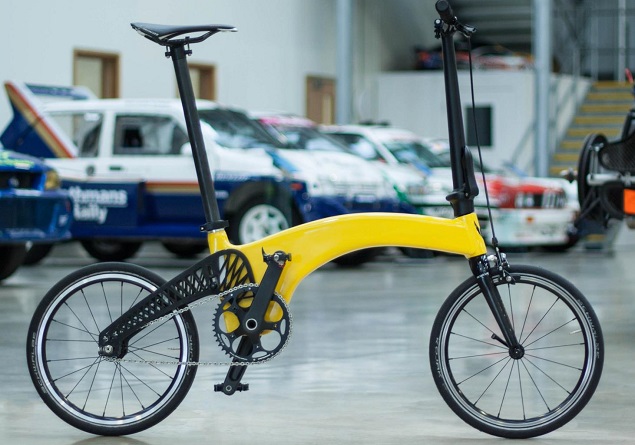 PRODRIVE’S FOLDING BIKE: It’s claimed the title of the world’s smallest when folded so is perfect for a car boot and then a ride to the office. Image: Newspress/Prodrive

The British motorsport and advanced technology business has refined the design and re-engineered key components to ready the bike for volume production.

The Hummingbird weighs only 6.7kg and is claimed to be the lightest folding bike in the world, thanks mainly to its carbon frame, carbon forks and seat post, all being made in the UK.

Hummingbird has a unique and simple folding mechanism in which the trailing arm pivots around the crank. Unlike other folding bikes, this ensures the chain always remains in tension, even when fully folded.

It also allows the bike to be wheeled along when folded.

The bike was conceived by Petre Craciun, a London-based designer and keen cyclist, who believed existing folding bikes were heavy and unattractive so he decided to design his own.

Craciun explained: “Most folding bikes are at least 12kg, a lot to carry up and down stairs or on and off a train. I wanted to design something really different, not only half the weight of existing folding bikes but also a product with distinctive styling – eye-catching, instantly recognisable, something people would be proud to be seen riding.”

YEAR IN THE MAKING.

David Richards, Prodrive’s chairman, said: “We’re always looking for interesting and innovative projects into which Prodrive can inject its technical and engineering expertise. Since I first met Petre in 2015 and saw his concept it’s taken us about 12 months to bring it to fruition.

“The Hummingbird combines all the key attributes of style, innovation and technical excellence that Prodrive stands for and we’re very proud of the end result.”