Each concept, forseeing a future when vehicles will not only drive autonomously but also be tailor-built to suit the buyer’s lifestyle, Kia says, is meant to show what could be just around the corner.

Also making a Sema debut is the Telluride full-size hybrid SUV concept that was first shown at the Detroit auto show earlier in the year.

Michael Sprague, COO and executive vice-president of KMA, told The Corner from the show: “Through our 22 years in the US we’ve watched with pride as our vehicles helped people live active and diverse lifestyles. Sema ’16 has given us an opportunity to ponder on what the future of living the autonomous life may one day resemble.”

Five custom vehicles have been showcased for the show, each avoiding what people usually ask of our day-to-day vehicle needs “to blaze a thought-provoking trail of imagination and fun”.

So, here they are…

This one was custom-built by master craftsmen at LGE-CTS Motorsports to morph a 2015 Kia Niro into a tri-athlete’s crossover utility/lifestyle vehicle capable of following himher autonomously while simultaneously record the rider’s performance.

The roof has gone from the D pillars backwards to create a bed and to mount a custom bike-rack, tool box and tablet computer mount. The Felt IA 2 road-racing bike can be easily removed or locked in place for repairs or transport.

A rear-mounted ONEU safety laser bike-lane light can illuminate a laser LED road behind the vehicle so the athlete can easily monitor speed, time and distance covered through the tablet while the Niro autonomously keeps pace.

The tablet can also be attached inside the vehicle for entertainment or performance analysis while the Niro drives the athlete home or to herhis next competition.

The Niro’s suspension has been dropped by five centimetres and the car is shod with 265/35 Dunlop Direzza sport radials and light 18″ Method Rally Race rims.

Removing the passenger-side B pillar allows easy entry into a cabin “designed for comfort and efficiency”. The back door has been modified to open on a rear-pivot hinge, the front door re-designed to open through a full 90 degrees.

“With no reason to drive,” Kia America says, “the athlete is cosseted in an ultra-comfortable ‘Human Touch’ zero-gravity ergonomic reclining chair. Custom cabinets hold essential supplies, clothing and parts, and a portable shower will allow a post-race clean-up.” 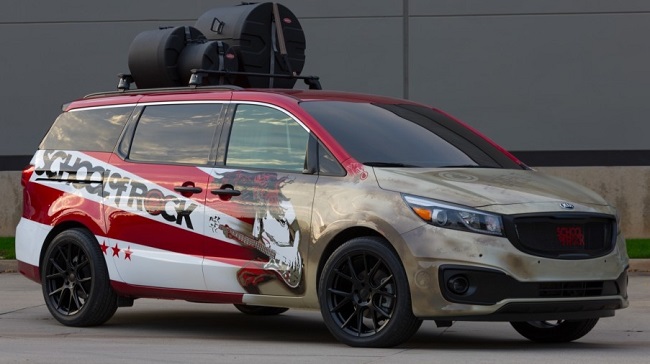 SUPER-SAFE FOR BUDDING MUSOS:  The Kia/School of Rock Sedona is the modern way to transport the band from gig to gig.        Image: Kia America

Autonomous vehicles remove the possibility of human driving errors. Kia says it imagines a world in which vehicles will autonomously transport youngsters to accommodate their parents’ busy lives.

Kia partnered with School of Rock, a leader in performance-based music education, to turn a Grand Sedona over to LGE-CTS to turn the vehicle into a gig van.

“This rolling recording studio.” Kia America said, “has everything aspiring musicians crave: a studio, a place to chill and a hands-free way of transporting the band to the next gig.

“The stunning hand-painted School of Rock imagery hides the strong bones of a five-star safety-rated Grand Sedona so parents can be assured their kids will make it to the show and home again safely.”

School of Rock plans to hit the road in style to perform shows at 180 locations with their talented musicians.

Significant enhancements include the removal of the driver’s-side B pillar, steering assembly and gear-shifter to make room for a digital mixing board and two flat-screen monitors to record tracks. Front speakers will pump out the tunes; when a track is being laid down a roof-mounted ‘RECORDING’ light will illuminate.

NO, THE INSTRUMENTS ARE IN THE ROOF

Vocalists will appreciate the boom microphone hanging from the ceiling; studio-quality acoustic foam insulates the interior during an intense recording session and, should the band decide to host an impromptu roadside show, the Grand Sedona’s tail door can be flipped open to reveal an imposing stack of amplifiers.

There is also roof storage for guitars and other instruments and custom bean bags await relaxing band members.

No modifications were made to the suspension but the Sedona rides on black 20″ Vossen VFS-6 wheel rims wrapped in Toyo Proxes 255/45 radials.

…followed by the Sorento Ski Gondola…

This custom autonomous-driving Sorento (image at top of report) was created by LUX Motorwerks to tackle snow and ice to get skiers up the mountain for another run.

“The luxurious and self-driving Sorento Ski Gondola,” Kia says, “is all about climbing to higher ground in style, comfort – and warmth.”

Dominator Rubber Tracks, powder-coated orange, allow the “gondola” to go anywhere. A custom metal roof-rack carries skis and poles, the cargo area boots, bags and other gear all easily accessible thanks, again, to removing the B pillar and the rear-hinged.

The Sorento’s headlights have been painted black, silver and orange and diode light bars have been installed for clearer visibility in all conditions.

The vehicle’s interior has been upgraded with custom door-panels, facia and centre console to take a personalised tablet. “Black and orange leather,” Kia adds, “complements the orange and silver metallic paintwork in the cabin.

“The whole cabin has a durable waterproof lining to protect against the ice and snow.

…and riding on a cloud in the…

“The Soul First Class,” Kia says, “is an upscale inter-city chariot that lets business travellers work and relax as they journey autonomously to distant meetings and destinations.

“This self-driving, custom-built, creation from LUX Motorwerks has rear-facing seats, a wide array of luxury enhancements – but no steering-wheel. It’s about optimising work and rest amid a professional work life.”

Given that no driver is required, the Soul First Class has two rear-facing seats instead of a facia and there’s a 40″ Samsung LED TV connected to a Mac mini-computer and premium audio.

A custom motorised centre console carries two tablets to tell the car what to do and where to go.

“To match the first-class electronic system,” Kia explains, “is first-class comfort with diamond-stitched white-and-gray leather throughout and gray timber flooring.”

The Soul’s exterior has modified upper and lower grilles with diode lights’ 19″ moblock wheel rims, Kia claims, add a modern vibe to the car’s exterior “and round out the complete autonomous-vehicle inspired overhaul”.NO,

…and finally the… Telluride Concept

“The Telluride,” Kia says, “shows a future grounded in the present, a three-row, seven-person, luxury hybrid SUV with a modern and upright shape, muscular stance and state-of-the-art technology for its occupants.”

The car is, however, only a concept based on an existing platform to show off Kia’s interest in potential premium SUV even posher than the current Sorento.

Access is through counter-opening front/rear doors to give an panoramic view of the cabin space and “a technological showcase”. Four black leather captain’s seats, Kia says, seem to float in front of a folded third-row bench. The middle seat-row can recline nearly flat and has fold-away foot rests.

Each of the four seats has embedded sensors to capture passenger’ vital health information. “Once obtained,” Kia explains, “the data will be displayed on screens for synchronisaton with a diode ‘rejuvenation system’.” That’s a large, wing-shaped diode panel mounted beneath the oversized sunroof to display a pattern of therapeutic light to treat desynchronosis (jet lag) and improve the passengers’ energy levels.

The Telluride’s cabin and exterior were penned at the brand’s design centre America in California; it’s finished in dark green paint. The height of the vehicle has been emphasised by its overall size: it’s 1.8m tall, two metres wide and five metres long long.

“The modern and muscular appearance,” Kia adds, “is accentuated by flared fenders stretching around 22” five-spoked rims wrapped in Hankook Ventus ST 275/45 radials. The recessed quad-diode headlights come with pronounced horizontal diode indicator lights and a polished skid-plate below the bumper.

“Thin vertical tail lights align with the modern design of the SUV and styling cues across the front and rear door releases, hood scoops and dual exhaust tips enhance the vehicle’s solid appearance.”