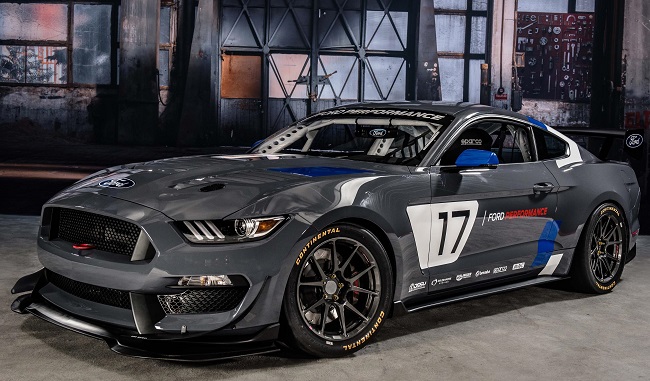 The car, unveiled at the 2016 Sema Show in Las Vegas, was designed and engineered jointly by Ford Performance and Multimatic Motorsports to compete in sports-car championship racing globally.

That, Ford US says, includes the GT4 European Series.

The Mustang GT4, Ford says, puts the car alongside competition such as Porsche and Aston Martin, just as in the hugely popular FIA World Endurance championship in which the Ford Chip Ganassi Racing Ford GT races against the Aston Martin Vantage GTE, Porsche 911 RSR and Ferrari 488 GTE.

The new car was, the automaker adds, inspired by the Ford Shelby GT350R-C that won the IMSA Continental Tyre Sports-Car Challenge in October 2016.

David Pericak, global director of Ford Performance, told The Corner in a media release: “As the Mustang nameplate continues to expand its presence in markets around the world so does our motorsport presence,.

“The GT4 is equipped to win on tracks around the globe and we expect it to be as popular with racers as the production models are with the public.”

The GT4 has non-turbo 5.2-litre V8 race engine tuned for GT4 competition and was, Ford explained, engineered, validated and built by Ford Performance in partnership with Roush Yates Engines.

The powertrain also carries a dry sump oiling system and a ZF-developed twin-plate racing clutch and flywheel. (Specifications below.)

Chassis features on the Mustang GT4 include: