LONDON, England – Most off-the-cuff remarks, or pie-in-the-sky ideas, are dismissed as soon as they’re suggested but, so long as you’ve the time and budget, things can be done.

That’s the way Kia Motors UK says it operates so, when it came to ordering a truck to take the first Stinger in the UK to the crusher at the end of 2018 there was an unfortunate and mysterious delay in with the paperwork.

The mystery deepened while, in the background, the car remained in the showroom at Kia’s UK HQ. Meanwhile, heads from the product and media relations team were huddled in discussions about sneaky ways to keep hold of the HiChroma Red GT S.

After all, it had an interesting history: air-freighted to the UK early in 2017 as the pre-production homologation car for countless tests to prove its integrity as Kia’s brand-new flagship.

It was seen, wearing UK plates LA66 HTG after being registered on February 22 2017, it become the cover car of many UK publications, its stardom assured thanks to its appearance on BBC’s ‘Top Gear’ and Amazon’s ‘The Grand Tour’ TV shows

The public were also able to clamber over ad in the car during dealers’ road shows while it was used as a dealer roadshow vehicle at Kia showrooms and at events up and down Britain. Most pre-production cars, Kia says, cover a few thousand kilometres: LA66 HTG clocked up 16 000.

Later, the car was used for final testing and tuning in the UK, with the engineering sign-off being carried out by Albert Biermann, Hyundai group’s head of research and development.

EVERYBODY WANTED TO PLAY

Now Kia has revealed the backroom work done by a company full of enthusiastic petrol heads who conjured up a compelling proposal and had it approved by the media and technical teams.

The project was eventually completed with the help, advice, and engineering know-how of the Hyundai Motor Europe Technical Centre in Rüsselsheim, Germany.

The team was led by test and development boss Tyrone Johnson, known for his work on fast Ford hatchbacks until he joined Hyundai Europe in August 2018. All necessaries for the eye-catching Stinger GT420 were already in the car’s DNA, created by Kia engineers at the company’s Namyang development centre in Korea.

A meaty 3342cc V6 twin-turbo petrol engine with direct injection develops 275kW/510Nm out of the box. 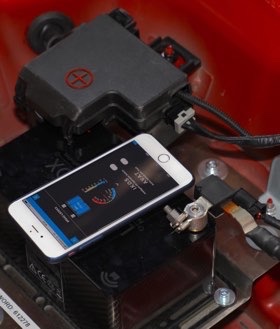 A six-row automatic transmission cooler replaced the four (so the auto transmission wouldn’t overheat on track) and its software recalibrated for faster shifts in Sport and Sport+ modes.

These measures took the vitals to 316kW/560Nm… but any racer knows less weight maximises performance.

The mutilation continued: the Stinger’s sunroof was replaced by a steel panel, taking the total weight-saving to about 150kg after the installation of a roll cage, race seats/belts and fire-extinguisher.

Underbody stiffening involved a (over the engine) crossbar and a pair of bars at the rear. Completing the weight-saving measures, a Lite Blox LiPo battery was installed to replace the original item and shave 22kg.

Standard shocks were used for the racing set up, with Eibach Pro lowering springs and anti-roll bars of 25mm at the front. At the rear, a 17mm in-house anti-roll bar was fitted. The continuous damping control was axed in favor of a conventional damper set up with some fine tuning.

Last came ”some the final flourishes for extra muscle”: a Stillen front splitter and rear diffuser were added, along with a rear spoiler by Air Design. But the final pièce-de-résistance was an eye-catching wrap that integrates nicely with the existing HiChroma Red paintwork by adding white and graphite grey elements.

…BUT WHAT DID IT ALL COST?

Kia admits the sum is hard to calculate with much of the project completed outside normal business but the blood, sweat, and tears expended could not be counted in a monetary sense.

The project was unique but Kia’s current tagline could have been created just for this project – ‘The power to surprise’.