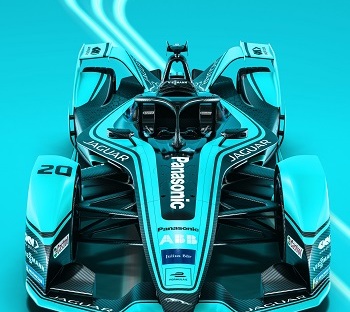 PRETORIA, Gauteng – Panasonic Jaguar Racing has revealed its all-electric race car to challenge for Season 6 the FIA Formula E championship to the news media, partners and fans at Jaguar’s new design studio in Gaydon, Warwickshire – said to be the world’s most advanced automotive design centre.

The Jaguar I-Type 4 has a new motor, gearbox, inverter, rear suspension and shock-absorbers to carry a lighter car that, Jaguar says, has lost mass but added better handling and performance.

The powertrain is said to be the lightest and most efficient yet from Jaguar and has a lower centre of gravity as part of Jaguaar’s push towards more points, podiums and wins.

Jaguar adds that experience gained during development of the World Car of the Year-winning, all-electric, Jaguar I-Pace and three years of Formula E racing, has put the brand at front of battery/electric vehicle innovation.

James Barclay, Panasonic Jaguar Racing’s director,told The Corner in a media release: “The start of a season is an exciting time. After months of hard work we are excited to show the world the new Jaguar I-Type.

”We’ve applied all of our experience in Formula E and our latest innovations into the new race car and the development team has created what we believe will be our most competitive Formula E car yet.

”We’ve learned how to win as a team and we’re hungry for more.”

Briton James Calado, 30, will be the new Panasonic Jaguar Racing driver. He started in karts in 1999, has raced some of the biggest names in motorsport – among them Formula E champion Jean-Eric Vergne and F1 driver Valtteri Bottas.

He’s based in Wales, has a wealth of single-seater experience in GP3, GP2, British F3 and F1.