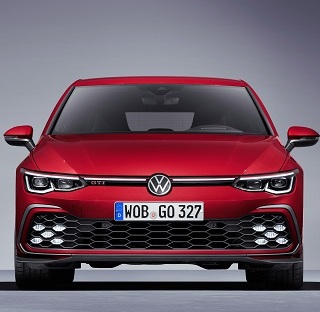 WOLFSBURG, Germany – Volkswagen was to have unveiled the eighth-generation Golf GTI at the March 2020 Geneva auto show alongside its hybrid GTE and diesel GTD siblings – each of them equipped with more power, innovative driver’s interface, and fresh design, inside and out.

So, here’s what we know so far… given that the Geneva show has been cancelled because of the corona virus ‘epidemic’.

The cars, starting with low-powered small family cars, have now been produced for worldwide sale for 44 years.

”The eighth interpretation of the GTI,” the automaker said in a pre-show media release, ”has been fully digitalised and networked… put simply, it’s a Golf GTI that’s perfect for the modern era.

To have been premiered at Geneva are a Golf GTD, Golf GTE, and the new Golf GTI. ”Three Golf variants,” VW says, ”and three characters, three efficient and clean drive systems – but one design philosophy, each described thusly:

GTI. The new Golf GTI is an agile, raw, efficient, 180kW and high-tech compact sport car for the digital age,.

GTE. Same engine output as the GTI but with a hybrid drivetrain is designed for sporty performance and but also electrical sustainability and zero-emissions range of around 60km to overcome city restrictions on combustion engines.

GTD. A real endurance athlete capable of 147kW yet able to travel further than its siblings thanks to diesel fuelling.

Each of the three has diode headlights that, VW says,”are positioned low and form a striking crossbar in conjunction with the radiator grille”. Towards the top of the bonnet, a narrow line crosses the front – red on the GTI, blue on the GTE, silver on the GTD.

Once the daytime running lights are activated, such as when the driver approaches with the key, an LED strip in the headlight mirrors the red, blue or silver line. As standard, the radiator grille is illuminated as a continuation of the LED strip for the first time. This creates the completely new, unmistakable headlight design of the Golf GTI, GTE and GTD.

Another striking and unmistakable feature is the typically large, honeycomb-pattern one-piece lower air intake grille. It is framed on the outside by black applique, with a striking wing-like design on the sides. The new GTI insignia also include the optional foul-weather lights, now as X-shapes in the air intake grille.

Standard 17” aluminum-alloy wheels rims are, unique to the GTI – with the options of 18 or 19”. The brake callipers – as on a number of its predecessors, will be red while the GTI and GTD will also bear a badge with their respective lettering on each front wing.

The GTE – being battery-powered, will have a cover on the passenger side to accept the charging plug. All models, however, will have wider black sills and a race-style splitter design. A spoiler finishes the roof.

The driver faces a steering-wheel with three sets of silver double spokes and a Wolfsburg (the cars’ home town) badge, and a golf-ball shifter while perched on tartan upholstery.

Many details of past models remain but VW has gone tech-crazy: leather-clad multifunction steering-wheel and an optional Travel Assist button to help the Golfs to 210km/h while engaged.

Standard is a six-speed gearbox, optional is a seven-speed dual-clutch auto transmission; the GTD comes with a six-speed ‘box developed for the hybrid drivetrain. The functionality of the standard start/stop button has been customised – it pulses until the driver prods it.

All models, however, will come with lane-keeping, auto emergency braking that spots pedestrians, an electronic differential lock and Car2X (local communication with other vehicles and the traffic infrastructure).

GTE. The electric petrol/battery hybrid makes 120kW, its 1.4-litre turbocharged engine, 85kW, to a maximum employable 180kW/400Nm. If you run out of fuel the electric motor might just make it to a fuel station not more than 60km away.

VW says it has improved electric range by increasing batteries’ storage by half to 13kW/h to enable 80km/h when the battery is sufficiently charged: the drive system will always start in electric mode, switching to internal combustion power as the battery storage depletes or if the car is taken beyond 80km/h.

GTD. What VW describes as ”the long-range sporty Golf” has a two-litre turbodiesel engine capable of 147kW/400Nm. Two catalytic converters and AdBlue injection is said to ”greatly reduce” nitrogen oxide emissions and comes with a seven-speed, dual-clutch gearbox.