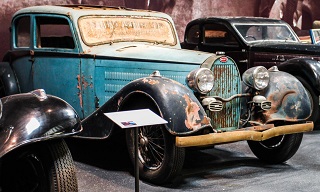 MOLSHEIM, Germany – About 60 years ago one Fritz Schlumpf bought 30 Bugatti vehicles after tough negotiation… after all, he is said to have adored Bugatti automobiles and vowed to own as many of the 30 vehicles as possible to establish the world’s biggest Bugatti collection.

He became obsessed, as shown in his negotiations with an American Bugatti owner, and continued for at least two years.

The names Bugatti and Schlumpf have been intertwined for a long time. Schlumpf bought his first Bugatti aged 22 in 1928 and drove it on weekends and in car races. He kept in touch with the Alsace province-based company through later years but his obsession to collect them didn’t really develop until 1961.

Back in the day Schlumpf was a wool broker whose brother Hans joined the company. In 1935 they founded Société Anonyme pour l’Industrie Lainière (SAIL), a limited company but also trading in wool. After the Second World War the brothers bought up several factories and spinning mills in Alsace until they almost dominated the textile industry in eastern France.

In 1957 they acquired a disused wool factory in Mulhouse, Alsace, to build their own automobile museum to honour of their beloved mother and Ettore Bugatti but mainly for Fritz himself. After all, collecting Bugatti cars had been his obsession. From 1961 forwards he acquired many classic vehicles and eventually became the world’s leading Bugatti collector.

How? Well, he wrote to Bugatti owners around the world in the early 1960s after gleaning their addresses from a register kept by British Bugatti Owners’ Club member Hugh Conway who put him in touch with American collector John Shakespeare in Hoffman, Illinois, USA, in 1962.

Shakespeare had dedicated himself to collecting Bugattis from the early 1950s. His first car was a 1932 Bugatti Type 55, followed by a Type 41 Royale Park Ward (the third and last customer car), 12 Type 57, three Type 55, and Ettore Bugatti’s personal electric car – a Type 56 dating back to 1931.

All in all, back then, Shakespeare owned the largest Bugatti collection in the world – more than 30.

Schlumpf simply had to get hold of these cars and made Shakespeare a lump-sum offer of US$70 000 but the latter demanded at least US$105 000, whereupon Schlumpf had the collection assessed by Bugatti connoisseur Bob Shaw from Illinois in 1963.

Shaw arrived at an unflattering conclusion: “Most of the cars are kept in a part of the building with a dirty floor, broken windows, leaking roof and nesting birds. Every car is in some state of disrepair and none of them has been running for at least 18 months.”

Shaw advised against the purchase but Schlumpf was fully committed by this time and offered Shakespeare US$80 000 for the entire collection. After tough negotiations, mutual threats, and blackmail, Schlumpf and Shakespeare finally agreed on a purchase price of US$85 000 the following year (equivalent to about US$720 000 in 2020) – including transport to France.

It was more than just a good deal from today’s perspective – in fact, it was a real bargain!

30 BUGATTIS ON ONE TRAIN

On March 30 1964 the 30 Bugattis left Illinois on a Southern Railway train heading for New Orleans where they would be loaded on a Dutch cargo ship. A photo shows the open train with the large number of rare vehicles.

A few weeks later, the freighter reached the French port of Le Havre, where Fritz Schlumpf finally received his treasure. He was now one huge step closer to achieving his goal of being the most prolific Bugatti collector in the world.

It wasn’t until 1965 that the Schlumpf brothers publicised their collection in a short news release – and the idea of a museum was born. Fritz Schlumpf, however, never officially opened it.

The Schlumpf brothers had little opportunity to enjoy their unique car collection and their pleasure in these wonderful cars was only to last a few years: large-scale strikes occurred after they engaged in questionable business practices and the decline of the French textile industry in the 1970s eventually meant they were forced to flee to Switzerland.

The story of the amazed workers who came across the secretly hoarded treasure in 1977 has gone down in automotive history.

What remains are the exclusive vehicles, showcased in an extraordinary and unique exhibition: the Schlumpf collection is now located in the “Cité de l’Automobile” national museum in Mulhouse in the heart of Alsace province – the largest automobile exhibition in the world.

It covers more than 25 000sq m and contains 400 of the world’s most rare,  magnificent, and valuable cars -among them about 100 Bugattis, such as two of only six Type 41 Royales built – and one them is the former Shakespeare vehicle with the Park Ward body.

More of the 30 vehicles are still in their original, unrestored, condition at the Mullin Automotive Museum in Oxnard, California. There, and in Alsace province, visitors can AND admire them after their almost 60-year odyssey.