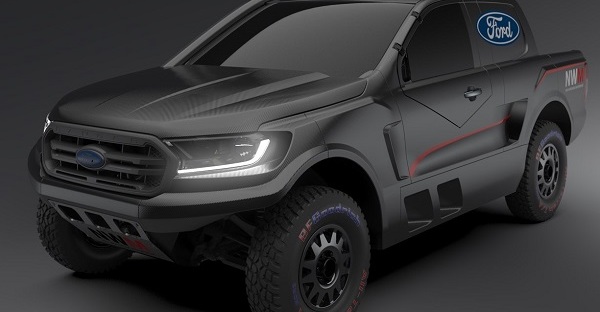 The monster in these images should join the series in the second half of the season and, according to the Woolridge operation, ”elevate the team to the highest level in domestic and international off-road racing under FIA regulations adopted in 2020 for turbocharged petrol engines”.

The Rangers are being assembled at the NWM workshop in Pietermaritzburg in kwaZulu-Natal (though stalled in April 2020 by the nationwide Covid-19 lockdown). It’s said to be based on a completely new in-house design ”optimised for the best packaging, weight distribution, and performance”.

NWM team principal Neil Woolridge told The Corner in a media communication: “Designing and developing this all-new vehicle through the past seven years enabled us to add the latest technology and components to experience gained in evolving the 25 (2020) Ford Ranger V8 units.

“These Rangers not only won back-to-back SACCS Class T titles (2018 and 2019) but also competed successfully around the world with four consecutive titles at Brazil’s Rally dos Sertões.

“We took more than eight months to design every aspect of the new vehicle – an exceptional achievement from a clean sheet – and are eager to finish it and start testing.”

The styling has clear lineage from the standard Ford Ranger assembled at Ford’s Pretoria plant but is  wider and bolder in design than the current V8 racing units ”developed to match the broader chassis and suspension”.

Light but high-strength chromoly tubing has been shaped in-house by NWM for the chassis and the rollover protection cage on a specialised jig. The body panels are carbon fibre, a gullwing design to give the crew give the driver a more spacious cabin – also full of carbon-fibre fittings.

Behind the crew is a 480-litre fuel cell produced by Aero Tec Laboratories in the UK – a company that has supplied all Formula 1 teams for the past 25 years. ”It won’t,” Woolridge says, ”be full for South African racing but will be for for long-distance endurance events such as the Dakar Rally.”

Aircon and windscreen heating – the latter for cold climate or high-altitude racing.

And so to that now mid-mounted 3.5-litre twin-turbo EcoBoost V6 engine…

Woolridge says the unit is the same as that used in the F-150 Raptor (video) in the US and the exceptional Ford GT supercar (video) that took Ford’s American brand to the top of the podium at the 2016 24 Hours of Le Mans with its programmable Motec electronic engine management, twin air-filters and two intercoolers.

”The engine’s compact dimensions of the V6 allowed further optimisation than would have been possible with V8. It’s also lighter by 150kg. Despite its smaller size and capacity, the EcoBoost V6 can deliver more than 300kW and 700Nm – the latter a significant increase over the non-turbo V8.”

”A new Evo six-speed sequential gearbox is 10kg lighter, much more compact, and uses a lot less oil. Based on the gearbox used by many teams in the World Rally championship, it is much easier – and faster to exchange – during a service stop.”

Its power flows through front and rear differentials to permanent all-wheel drive and the package will stay on the road/track on four sets of twin fully adjustable BOS Suspension shock-absorbers with 280mm of travel.