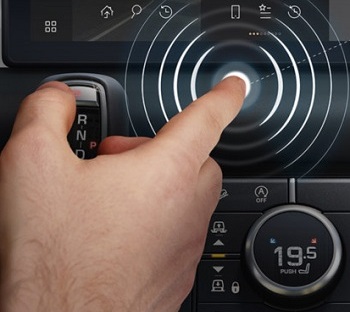 ‘Predictive touch’ uses artificial intelligence and sensors to make the user’s choice – satnav, aircon, or entertainment settings – without the human touching a button.

JLR’s Driver Condition Monitor, engine noise cancellation, and cabin air filtration already, the automaker says, ”capture ultra-fine particles and allergens” so ”predictive touch” is regarded by the company as ”another step forward as we address the wider landscape of mobility”,

”Laboratory testing and on-road trials,” JLR says, ”showed predictive touch could halve a driver’s touchscreen interaction effort and time by as much as 50%.”

Bouncing around on a rough road or track can make finger contact with buttons and switches difficult, forcing the driver to glance away from the road – with the risk of an accident.

”The technology uses artificial intelligence to determine the screen item the user intends to select so a gesture tracker uses vision-based or radio frequency-based sensors – increasingly common in modern electronics –  to combine contextual information such as user profile, interface design and environmental conditions with data available from other sensors, such as an eye tracker, to infer the user’s intent.”

Lee Skrypchuk, a JLR technical specialist, told The Corner in a media release: “We have noticed how many everyday consumer transactions are conducted by touchscreen. Predictive touch eliminates the need to actually touch the display and so reduces the risk of collecting bacteria or viruses.

“The technology can also make vehicles safer by reducing the cognitive load on drivers and increasing the time spent watching the road.”

This software-based solution, JLR says, can be seamlessly added to existing touchscreens.”

Cambridge’s Professor Simon Godsill, who led the project, said: ”People use touchscreens many times a day but they can be difficult to use while driving. We also know that pathogens can be transmitted by touch so this technology could help to reduce such transmission.”

Predictive-touch tech was a finalist in the annual Jaguar Land Rover Innovista Awards which champions innovative ideas from across the business.