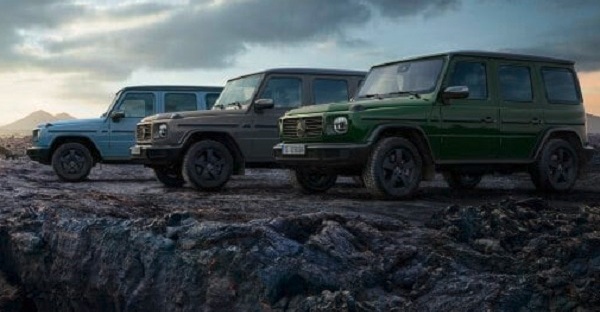 STUTTGART, Germany – Mercedes’ G-Class 4×4 wagon has been around and improving continuously for more than 40 years and the story will continue from September 1 2020 when, the automaker says, their standard equipment will become even more comprehensive.

There will also, Mercedes says, be more ”personalisation” options, fresh body colours, extra equipment packages, and what the iconic automaker describes as ”the widescreen cockpit” will be used across all models.

The Corner has not been told when they vehicles might be available in South Africa but prices in Germany will start at the Euro equivalent of about R2-million rising to the equivalent R3.1-million for the Mercedes-AMG G63 monsterwagen.

Extra good news is that the previously hard-to-come-by G400d will be available without restriction instead of through special order.

”The most powerful configuration of the in-line six-cylinder diesel engine with an output of 243kW/700Nm from 1200-3200rpm,” Mercedes adds, ”will deliver propulsion befitting its status, even under tough off-road conditions.”

Which, The Corner points out, is what the G-Class is intended for. Anyway… Good news for the South African bundu-bashing fraternity is that there’s a new Desert drive traction choice invoked through a Dynamic Select rocker switch for maximum traction over sandy terrain – guess here in SA that would mean, well, real deserts…

”The perfect interplay of late upshifts and direct throttle response,” Mercedes told us in the media release, ”will make the G-Class even more to be a desert champion.” Strangely, Merc adds in the same paragraph: ”What is more, the Parking Package with reversing camera is now part of the standard equipment, helping the G-Class to cut a fine figure on any terrain.”

What the heck parking assistance will be used for when the tide is coming in on the Nambian desert coast and your’re between the waves and ancient 150m-high sand dunes is not explained. Perhaps ask your local dealer.

Many G-Class buyers/owners are extroverts (Well, you have to be, hey?) so the coming G wil have a string (please excuse the pun) of personalisation options: the ”often-requested” Night Package can now be ordered without the AMG Line and Stainless Steel Package. It includes heat-reflecting darkened windows and ”obsidian black metallic” mirror housings, radiator grille, turn indicators, reversing lights, and headlights.

New 20” multi-spoked alloy wheel rims will be exclusive to the AMG Line.

And so to the the ”widescreen cockpit” which, as already noted, will be on all G’s to, AMG says, ”set a clear technological tone to the aesthetics” and come with the frameless rearview mirror that was part of the former Leather Packages.

Expanded theft protection comes with an Urban Guard package that replaces previous systems that include tow-away protection, alarm siren and a collision alert. The stolen vehicle will also be tracked for – as with each of the alerts – for three years (in Europe, at least).

The list of personalisation options is a bible of its own: bumpers and wheel arch extensions, a body-styling bar, V8 lettering on the wings, AMG lettering, extended colour choices, special model badging, obsidian black touches, various Night packages… and all fitted during production to, Merc says, ”delivery without delay”.