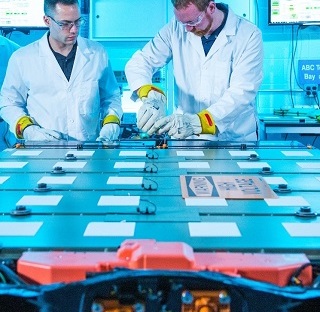 OSHAWA, Ontario – General Motors is about to become the first automaker to use an almost completely wireless battery management system for production battery cars.

GM told The Corner the system would become a primary driver of GM’s ability to, evebtually, power many types of electric vehicles from a common set of battery components.

It’s expected to get GM’s Ultium-powered EVs to market faster – the time reduced by developing specific communications systems or to redesign complex wiring schemes for each new vehicle. Instead, the ”wBMS” is intended to scale Ultium batteries across GM’s future products – brands and vehicle segments from heavy-duty trucks to performance vehicles.

Much like GM’s Ultium batteries, which are flexible enough to incorporate changing technology, the ’ basic structure can,The Corner was told, ”easily receive new features as software becomes available” with over-the-air updates over time with new software such as smartphone-like updates.

Kent Helfrich, GM’s boss for global electrification and battery systems, explained: “Scalability and complexity reduction are themes with our Ultium batteries – the wireless battery management system is the critical enabler.”

The intent is to balance chemistry among battery-cell groups for optimal performance, conduct battery-pack health checks, and refocus modules and sensors as needed – all to protect battery health through the vehicle’s life.

Battery wiring will be reduced by as much as 90% to create lighter vehicles so more batteries (and vehicle range) can be installed.

Re-purposing batteries will become easier – such as for combining with other wireless battery packs to form clean-power generators – all without redesigning or an overhaul of the battery management system.

A GM spokesperson told The Corner: ”General Motors is paving the way toward an all-electric future. Our collaboration will accelerate and sustain the transition to electric vehicles.”

The wireless battery management system is expected to be standard on all GM vehicles powered by Ultium batteries.