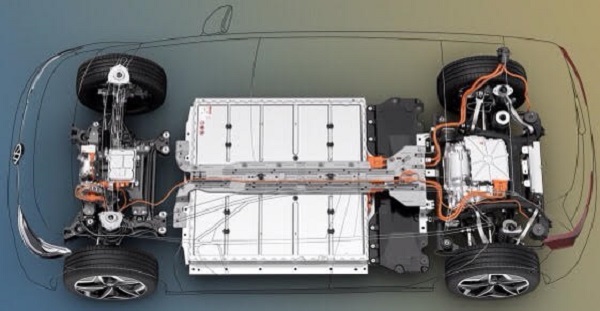 JOHANNESBURG, South Africa – Chances are your body might carry at least two lithium-ion batteries… one on your wrist, another in a pocket for phone calls. More, if you’re holding a car key-fob, have a heart pacemaker, or indeed any other electronic device.

Yet, do you know how those batteries work?

Such batteries are at the heart of modern life but remain something of a mystery despite humans use of batteries for hundreds of years, Only since about 1990 has the science of batteries advanced far enough to make possible long-range electric vehicles such as VW’s ID.4.

Among all alternatives, researchers suggest battery vehicles hold the promise of reducing carbon emissions from personal vehicles to help significant progress against what many believe is ”climate change”.

VW hopes to have the next evolution of lithium batteries powering its vehicles within a few years.

WHAT IS A BATTERY?

Batteries use chemical formulae identified by Alessandro Volta in 1799: every battery cell has two electrodes – one positive (cathode), the other negative (anode) and a substance between them (electrolyte). When connected to an electric circuit electrons move from the anode to the cathode through the electrolyte and ions move in the opposite direction, creating electric current.

Rechargeable batteries can reverse that process.

It wasn’t long after the creation of the first batteries that their use in vehicles was investigated. In the early years of the auto industry (around 1900) EVs were among the best-sellers thanks to their quiet operation, ease of driving, and low maintenance when driven on the world’s newly-paved cities.

Only when roads improved and fossil-fuel vehicles became less expensive did the first EV era end. A century later the revival of EVs was made possible by the creation of lithium-ion batteries; VW’s history shows how far such batteries have evolved.

VW, in the early 1970s, converted a few Microbus vans to electric power but using lead-acid batteries still found today under the bonnet of petrol/diesel vehicles. The early battery-packs gave perhaps 40km range but added about 850kg of weight. (VW does not mention the weight saved by removing the conventional engine as well.)

Today the largest lithium-ion battery pack in the Europe-only VW ID.3 EV holds nearly four times as much energy (82kWh) for a third of that weight and is at the heart of why EVs are considered by some to be one of the best choices for vehicles that combat climate change.

Liquid-fuelled vehicles use only about a third of their potential energy to provide motion –  the rest escapes as heat and friction and sends carbon gases into the atmosphere.

Similar waste happens with alternative fuels, from ethanol to hydrogen but EVs typically convert more than 75% of their energy to movement and, if charged by renewable energy, have zero direct emissions.

*Interesting, then, that tests in the UK showed diesel vehicles from assembly through use, and on to destruction, created less atmospheric pollution than either petrol or electric vehicles. Guess that didn’t suit the political will… Editor

Whatever, most EV owners will never see the batteries that power their vehicle. In the Volkswagen MEB electric vehicle platform, the batteries are built into the floor for optimal weight distribution.

EV batteries – such as those in the upcoming ID.4 electric vehicle – are not one huge cell but instead a modular flatpack in which “pouch” batteries are stacked 24 to a module, with as many as 12 modules connected like the squares of a chocolate bar.

There’s a number of reasons for EV batteries being made this way. Smaller cells carry more energy per pound; broken ones are easy to extract and replace.

”Most importantly,” VW says, ”as each battery can be controlled through software it can be easier to maximise power flow and battery life to maintain the steady delivery of energy as the batteries discharge.

”These systems can store and deploy tremendous amounts of electrical power. A typical cellphone battery runs at 3.7V; the battery pack in Volkswagen’s MEB electric vehicle platform operates at up to 408V.

”This helps the ID.4 EV to provide ample energy to its electric motors and power all the internal accessories, including heating and aircon.”

Battery power for vehicles does, VW says, have some drawbacks. EVs don’t hold as much energy as a liquid-fuel vehicle so range is less. It can take many hours to recharge a large battery-pack from a 110V domestic supply and, although there are fast-charge options, everyday use of high-power charging can degrade EV cells.

And EV batteries are the most expensive component in the vehicle.

…AND WHAT OF THE FUTURE?

VW is addressing such challenges with battery innovation start-up QuantumScape and the concept of the solid-state lithium battery. Today, most lithium-ion batteries use either a liquid or gel electrolyte. A solid electrolyte could, VW says, create a cheaper battery that holds more energy per pound, and recharge faster.

VW Group has invested $300-million in QuantumScape since 2012 to research and develop such batteries in the hope of bringing the technology to market ”in a few years”.