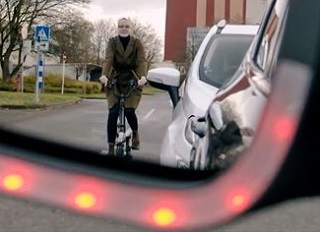 CAPE TOWN, South Africa – Every year thousands cyclists and motor-cyclists are seriously injured by a car/bakkie driver or passenger thoughtlessly opening a vehicle door as a rider approaches.

The result could be death or serious injury – the latter experienced first-hand many years ago by Carman’s Corner’s editor when a Johannesburg commuter thoughtlessly opened the passenger door as I was passing on a motorcycle.

The door’s edge chopped his kneecap in half but some excellent surgery saved the bigger piece and now, 35 years later, I am fortunate to still have full mobility in the joint. The passenger got off scot-free – injury- and court-wise – and never even said sorry.

Had the mirror with this feature been invented back then my accident might have been avoided – though, since then, perhaps 60 riders a year have been injured or killed in similar circumstances in Britain.

”Exit Warning” provides a visual and audible alert to car occupants should it detect that opening the door might cause a serious collision; it could, perhaps as further developed, refuse to open until the danger was past.

Ford vehicles already feature sensors and technology that can automatically detect and brake for cyclists and other drivers.

Using these existing sensors, Exit Warning analyses and understands the movements of approaching road users – bicycle or a motorbike – on each side of the vehicle and sounds an alarm to warn the driver or passenger of the danger.

Bright-red diodes (see image) will flash as a visual warning for cyclists; even better, a strip of red lights along the inner trim of the door gives a further warning.

Ford engineers will in coming months conduct testing with drivers and riders from customer clinics. Part of the testing will be to ensure that the technology accommodates road users in various markets.