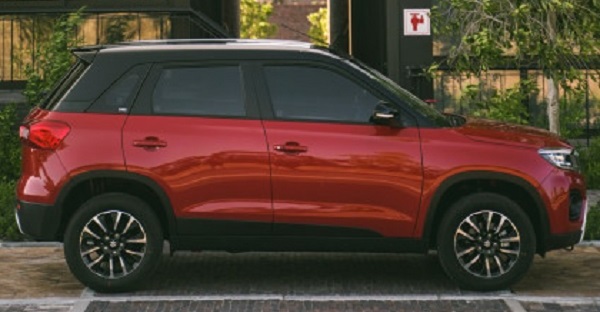 JOHANNESBURG, South Africa – India’s most popular compact SUV – the Suzuki Brezza – is the fastest compact SUV to reach 500 000 sales in that country. Now it’s on the South African market.

Suzuki SA describes the model as ”dynamic and well-specified” and reports that  GL and GLX spec units – manual or auto – is now in all 71 showrooms across the country.

The Brezza will share SA showroom space with the popular Suzuki Vitara – the former as the  entry-level model and the Vitara as the flagship.

Divisional manager André Venter told The Corner: ”The Brezza has, since its introduction in India, built a loyal following through its specifications and generous cabin. We’re sure to win over the hearts of our SUV-loving market.”

The first Vitara became available in South Africa through a direct importer in the late 1980’s; Grand Vitara led the sector when Suzuki Auto officially arrived s in South Africa in 2008, and the Grand Vitara remained a popular 4×4 until its discontinuation in December 2019.

The legacy continues today with the Vitara, launched in 2015 and upgraded with a Boosterjet engine in 2019. Now comes the Brezza whose design and dimensions, Suzuki SA says, will make it a nimble urban runabout but with the ground clearance, ride height, and cabin space of a growed-up SUV.

It has the same wheelbase as the Vitara at 2500mm but is shorter by 180mm, wider (15mm) and rides higher off the ground (198mm vs 185mm) and comes in two versions: GL and GLX. Each rides on 16” wheels. The GL has steel rims with silver wheel caps, the GLX ”diamond-c-cut” and polished alloy rims.

”Suzuki’s SUV design team,” the local office says, ”has packaged the Brezza’s dimensions perfectly. From the front there is a striking look created by a chromed grille that stretches between the headlights to visually underline the vehicle’s wide stance.

”The front lights have a chromed brow and diode daytime lights – guides to indentifying the GL; pure LEDs on the GLX accompany the projector main diode headlights.”

Suzuki says its fans will notice the inverted U of the lower grille, a signature Suzuki SUV-styling cue shared by the Vitara, S-Presso and Ignis models. This styling bar, Suzuki says, is flanked by bold foul-weather lights’ surrounds (LEDs on the GLX) and a black lower chin plate on the GL, silver on the GLX.

The Suzuki SUV look is said to continue on the sides of the Brezza: hard-wearing polycarbonate mouldings above the sils and wheel-arch extensions on all models, roof liggage rails and colour-coded external mirrors with diode turn indicators.

AND SO TO THE CABIN, IN WHICH…

…the first item to catch the eye, Suzuki says, will be the 18cm touchscreen – standard across the range and the centrepiece of the fascia. It has Apple CarPlay/Android Auto to display the image from the reversing camera, Bluetooth, an auxiliary input, and a USB port.

All models include hands-free control and a phone interface from the steering-wheel buttons or by voice command and the info display will also alert the driver to, for instance, low fuel and open door.

Other GLX additions include an auto-dimming interior and auto-folding external mirrors, auto screen wipers, a 12V socket in the boot, and tweeter speakers while there is no distinction between the safety equipment of the various grades of the same Suzuki.

All models will have a high-mounted diode third brake-light, a rear-window-demister/wiper with washer as standard.  An anti-theft system and immobiliser are also standard.

The Brezza range will have the same quad-valve engine driving the front wheels as the Suzuki Jimny, Ertiga and Ciaz. It’s capable of 77kW at 6000rpm/138Nm at 4400 rpm hooked to a five-speed manual or new four-speed auto transmission.

Standard external colours include white, Silver, grey, and orange. GL spec buyers can include red or blue. The GLX adds three two-tone options: red with a black roof, grey with an orange roof, and Blue with a black roof.

…AND SO TO THE PRICES